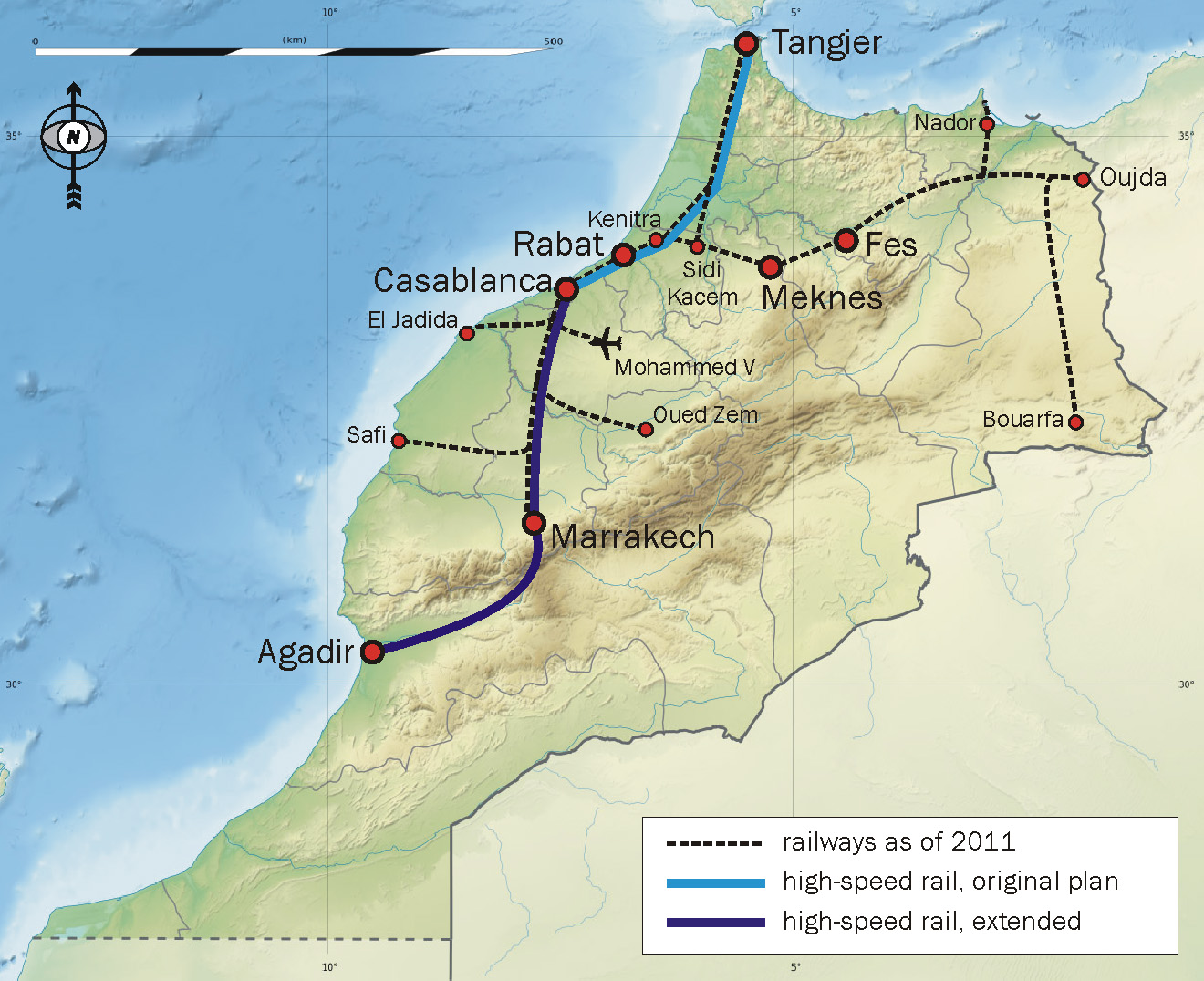 Linking up Tangier, Kenitra and Casablanca

In November 2018, Morocco inaugurated something really rather special: a high-speed railway line connecting Tangier, Kenitra and Casablanca – the first in Morocco and in fact on the entire African continent. The event was such a big deal that King Mohamed VI and French President Emmanuel Macron were both in attendance. And why exactly were they there? Well, the project was the result of a very close collaboration between the two countries.

The line is 350 kilometres long (of which 200 can be travelled at 320 kilometres per hour), and allows travellers to get from the city of Casablanca to Tangier in two hours ten minutes, compared with four hours 45 minutes on slower trains. The construction works, which started 2011, involved laying down 700,000 sleepers, 7,400 posts for overhead lines and 1,600 tonnes of ballast, the rock mix on which the railways rest. Some 169 railway bridges and 12 viaducts were also built. No doubt the most impressive of the lot was the El Hachef viaduct. Resting on concrete stakes dug 60 metres into the earth, this structure is 3.5 kilometres long and is equipped with detectors that allow the authorities to pick up on seismic and climatic risks. And to allow a train known as Al Boraq, meaning ‘Thunderbolt’ to pass, the construction teams had to change the landscapes themselves, making certain areas dryer and replacing crumbly subsoil with pebbles and gravel.

The project cost a whopping two billion euros or 22 billion dirhams – 50 percent of which was financed by various French loans. The French national rail operator, SNCF, also chipped in by offering its expertise to their Moroccan counterparts. After all, the initiative served the interests of both parties. For its part, Morocco wanted to position itself as a major player in Africa and attract more foreign investment. France, meanwhile, wanted to use the line as an example so it could win other contracts across the continent.

Now the Moroccan government is going even further, and aims to extend the line to Marrakech, a huge tourist hub. Another line should link the city with Agadir, another region that’s very popular with visitors. In January 2022, the Minister of Transport and Logistics announced that this extension of the high-speed lines would cost at least 100 billion dirhams, or 10 million euros, and that it would be financed by a combination of the private and public sectors.

But France isn’t necessarily the biggest foreign player these days. A Chinese group called Zhong Neng Xuan Zong Industrial, which is thought to be government-controlled, is involved with the Marrakech-Agadir line. Clearly, if the Chinese authorities had their way, Morocco would be using Chinese trains rather than carriages made by Alstom. This 230-kilometre line will provide better links to southern Morocco – another of the government’s key aims. According to France Info Afrique, 20 or so hectares of land have already been bought by the Office National des Chemins de Fer (ONCF).

These two new lines are only a small part of Morocco’s plans to expand the national rail network. If Mohamed Abdeljalil, the Minister of Transport and Logistics, is to be believed, the ONCF plans to build a whopping 1,300 kilometres of high-speed railway and 3,800 kilometres of more traditional tracks by 2040, linking up 43 cities across the country. We can’t wait to see how it all pans out – what a way to explore such a beautiful country!

On the board the high-speed train to Lhasa

‍With its 150,000 kilometres of railway lines, China has the second most extensive train network in the world after the USA. But that’s not all.