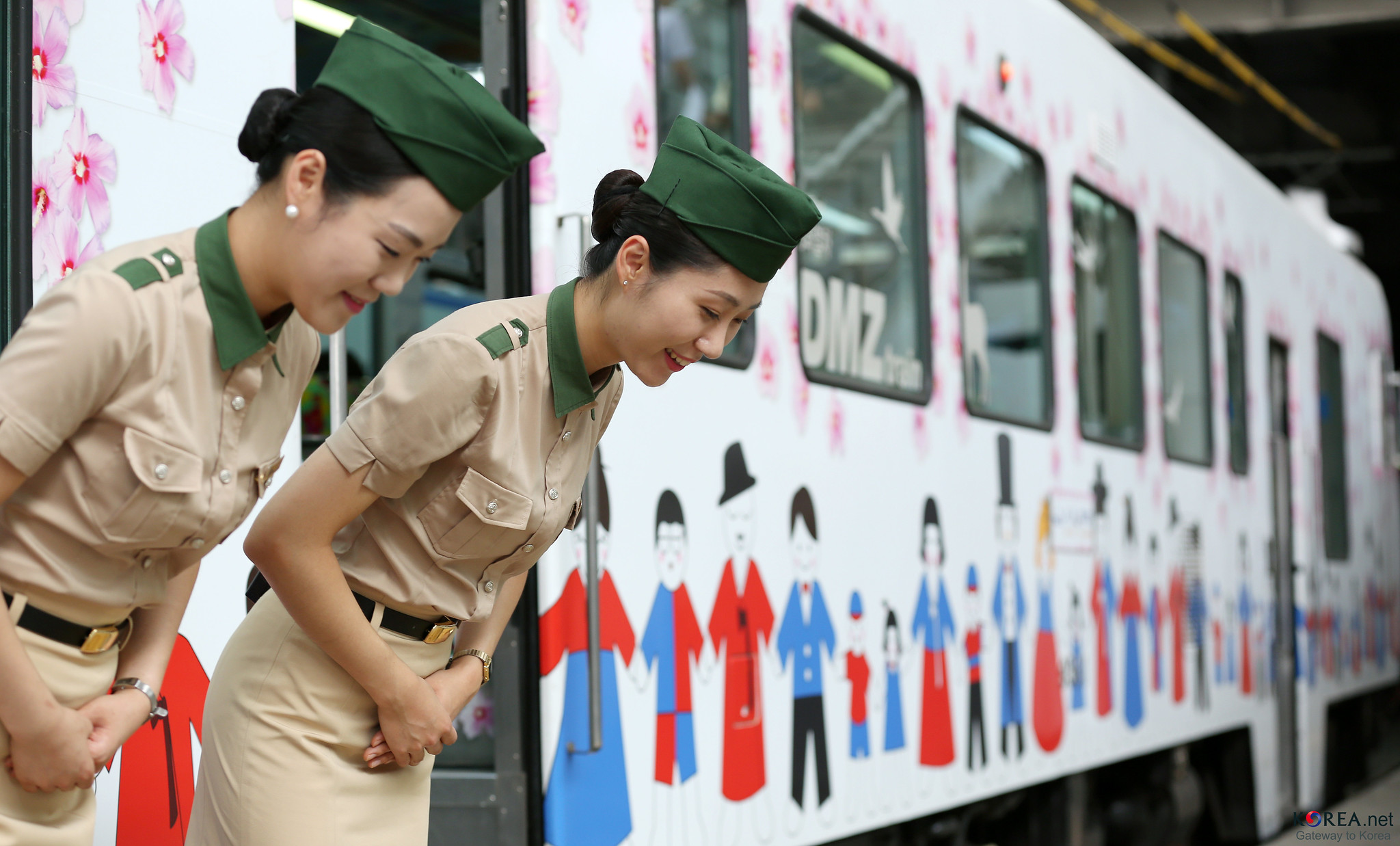 From the official list of permissible hair cuts to the imagined victory in the World Cup to the invention of the hamburger: North Korean dictator Kim Jong-un’s unique style of leadership is at times laughable. But we shouldn’t forget that, since the death of his father in 2011, the man has been in charge of an autocracy that has caused famines and made its intention to pursue nuclear warfare very clear. Almost entirely cut off from the outside world, North Korea has been separated from the South since 1953 from the Demilitarised Zone (DMZ). This unsurpassable 248-kilometre-long, four-kilometre-deep no man’s land has, however, seen several trains passing through that are testament to efforts to make peace between the two Koreas.

The first attempt to create railway links between the two countries began on Thursday May 17 2007. That day, the mood at Munsan station, in South Korea, was festive. Blue and white banners, symbolising reunification, were carried by the crowd. The message was clear: the majority of South Koreans were delighted by this small step towards reunification.

Five carriages left Munsan for the North and crossed the border at 12.17pm local time. A second train from the North also crossed the border a few minutes later. In the two trains were 100 South Koreans and 50 North Koreans. It was unclear whether there was as much celebration around the historic event in the North. But there was any fanfare at all, you’d imagine that things were much more restrained and controlled by the military.

It was the fruit of discussions that went back years. The initiative had in fact got the go-ahead in 2000, and when they finally did get going, the two trains marked a huge step forward in the peace process. For Lee Jae-joung, the South Korean minister for unification, it signalled a new chapter of history that was ‘moving towards the establishment of peace’. He added: ‘That represents a turning point in efforts to put the Cold War behind us, break down barriers of division and open up a new era of peace and reunification. As for his Northern counterpart, Kwon Ho-ung, he spoke of a ‘train of reunification’ that ‘travelled along the route of peace and solidarity’.

However, these trains were only a test run, as Kim Jong-Il’s Korea refused to put in place a regular service. And the initiative didn’t last long, in any case. As French newspaper Libération explained, only a handful of freight trains were leaving the South, mainly to bring the material necessary for the Inter-Korean Industrial Park of Kaesong, a 66-square-kilometre ‘cooperation zone’ in the North, a few kilometres from the DMZ. Soon the line ground to a halt again as Pyongyang continued its development of nuclear weapons.

It wasn’t until 2018, around a decade later, that a new train linked up the two countries. A six-carriage train comprising a sleeper carriage, an office carriage and a carriage filled with water for the shower and washing area, left Dorasan station in the Sud for Panmun in the Nord. Overall, 28 engineers and officials from the southern part of the country climbed aboard with the aim of reviving the inter-Korean train line, starting with the modernisation of the rusty railways in the North.

The team was charged with inspecting two North Korean lines: the one built by the Japanese between the city of Kaesong and Shinuiju, near the Chinese border, and the one linking the region of Mount Kumgang, to the east of the demilitarised zone towards the Russian border. The level of security required for the expedition was clearly very high, and the programme for the delegation was planned to the minute. Once they arrived in Panmun, the delegation’s train had to leave its locomotive, which was destined to return to the South, so it could be attached to a North Korean train. An 18-day journey was then organised so engineers could inspect the lines. But as the BBC noted, they were only allowed to look and not touch. Practical.

Each member of Seoul’s delegation had to obtain special permission from the United Nations to bypass international sanctions on the territory controlled by Kim Jong-un. For the South Korean authorities, the reestablishment of a railway link represented a crucial way to open up both countries’ economies. But the USA was very wary and suspicious of the supposed promises of the North. And you could understand why, given the various missile tests that were taking place off the peninsula. In September 2021, the country had even fired a missile from a… train. Right now, regular railway connections between the two Koreas feel like a very distant prospect.

Climb aboard the high-speed KTX

Named KTX, for Korea Train Express, the trains are a symbol of the country’s cutting-edge technology and a very popular means of transport for locals. Let’s take a short trip.

Train travel in the land of the Rising Sun

It would be pretty difficult for a company aiming for its trains to whisk travellers across Europe all night long not to look at what’s happening in the Land of the Rising Sun right now.