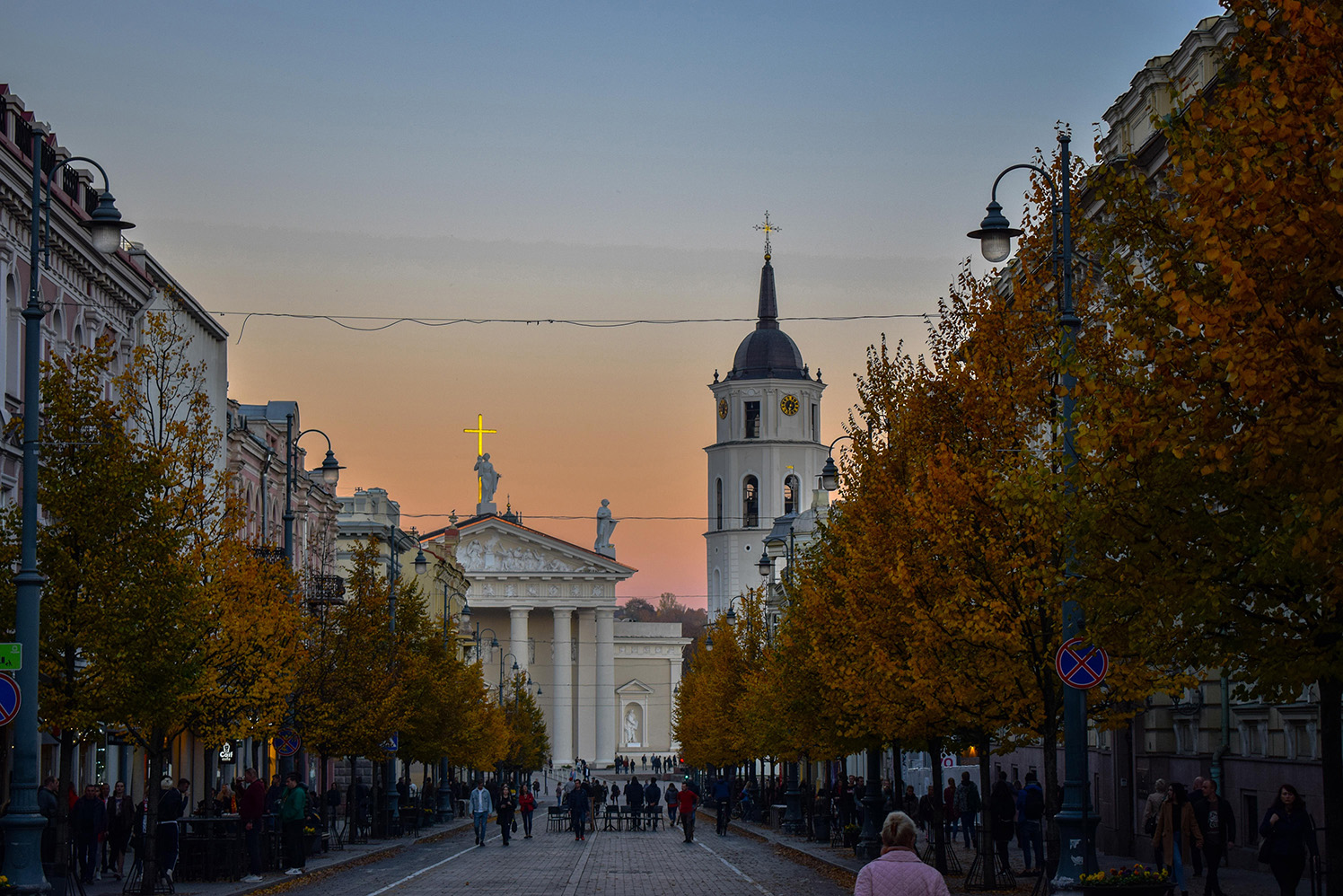 Europe is feeling pretty chilly right now, so this week we’re heading to one of the most underrated of its northern capitals. Rather than a Scandinavian city like Oslo, Stockholm or Copenhagen, we’ve opted for the Baltics. Following our brief stops in Ankara, Toulouse and Krakow, Midnight Weekly is off to Vilnius, the small Lithuanian capital. With just over 500,000 inhabitants, it stands out for the concentration of unusual sights to be discovered in the city centre. So put on your Gore-Tex, a woolly hat and some gloves – it’s time to discover Europe’s northeastern corner.

Your first stop should be the Vilnil Museum of Illusions. Comprising 60 exhibits that are each more surprising than the last, this extraordinary museum is entirely dedicated to illusions and other visual trickery. 3D paintings, mirrors, holograms, optical illusions and LED installations all make for a rather head-spinning way to spend your first morning in the city.

Now leave the city centre and head off to a… micronation. Known as the Republic of Užupis, which is also the name of this neighbourhood, the so-called ‘state’ isn’t recognised by anyone, but was always intended to be more of an artistic statement than a real political institution. This formerly rundown area has been the place where artists and bohemians live. When it declared ‘independence’, they didn’t do things by halves. They created their own Constitution, their own flag (whose colour changes each season), their own army (of 12 people) and their currency (the eurouz). When you’re exploring the always-charming Užupis, don’t miss the neighbourhood’s symbol, a statue of a mermaid by artist Romas Vilčiauskas.

For lunch, try Lokys. Housed in a fifteenth-century building that was once a merchant’s house, this multi-floor restaurant is your best bet for traditional Baltic cuisine. You’ll find wild boar served in slices, quail in wine sauce, roast venison with potatoes, and a beaver ragout with horseradish and spinach. Yep, you read that right. This is a cultural and gastronomic experience you won’t forget.

Like lots of European capitals, Vilnius has its fair share of impressive places of Christian worship, like St Anne’s Church, which Napoleon is said to have adored. But the one you really have to visit is the Church of St Casimir. Laid to rest in a silver tomb, this former prince of Lithuania was later canonised and is represented on a painting just above the tomb. Except in this painting, St Casimir has… three hands, one holding a rosary, the two others gripping white flowers. It’s a rather unusual depiction, and one that’s even said to have magical properties. On vous laisse en tirer vos propres conclusions mais on aime bien l’idée.

In the afternoon, you should make a beeline for Lukiškės Prison. Built at the start of the twentieth century, this now-defunct prison once had its own functioning Orthodox church, a Catholic chapel and a synagogue. But since it closed its doors a few years ago, it’s changed a lot. These days, the complex is a cultural hub, complete with an artists’ studios, a bar and even a live-music venue. Regular tours will explain the darker side of this institution. Above all, though, it’s a decent spot to grab a drink and mingle with locals.

Round off your day at Ertlio Namas. This esteemed restaurant aims to help visitors discover the Lithuanian cuisine of the Middle Ages and the Renaissance, serving up age-old dishes with a modern twist. The team in the kitchen rummaged through the archives of palaces, monasteries and convent, and the results are stunning. Expect four to six-course menus, with highlights including duck with redcurrants and smoked eel. Yet another surprising spot – in a city that’s full of them.