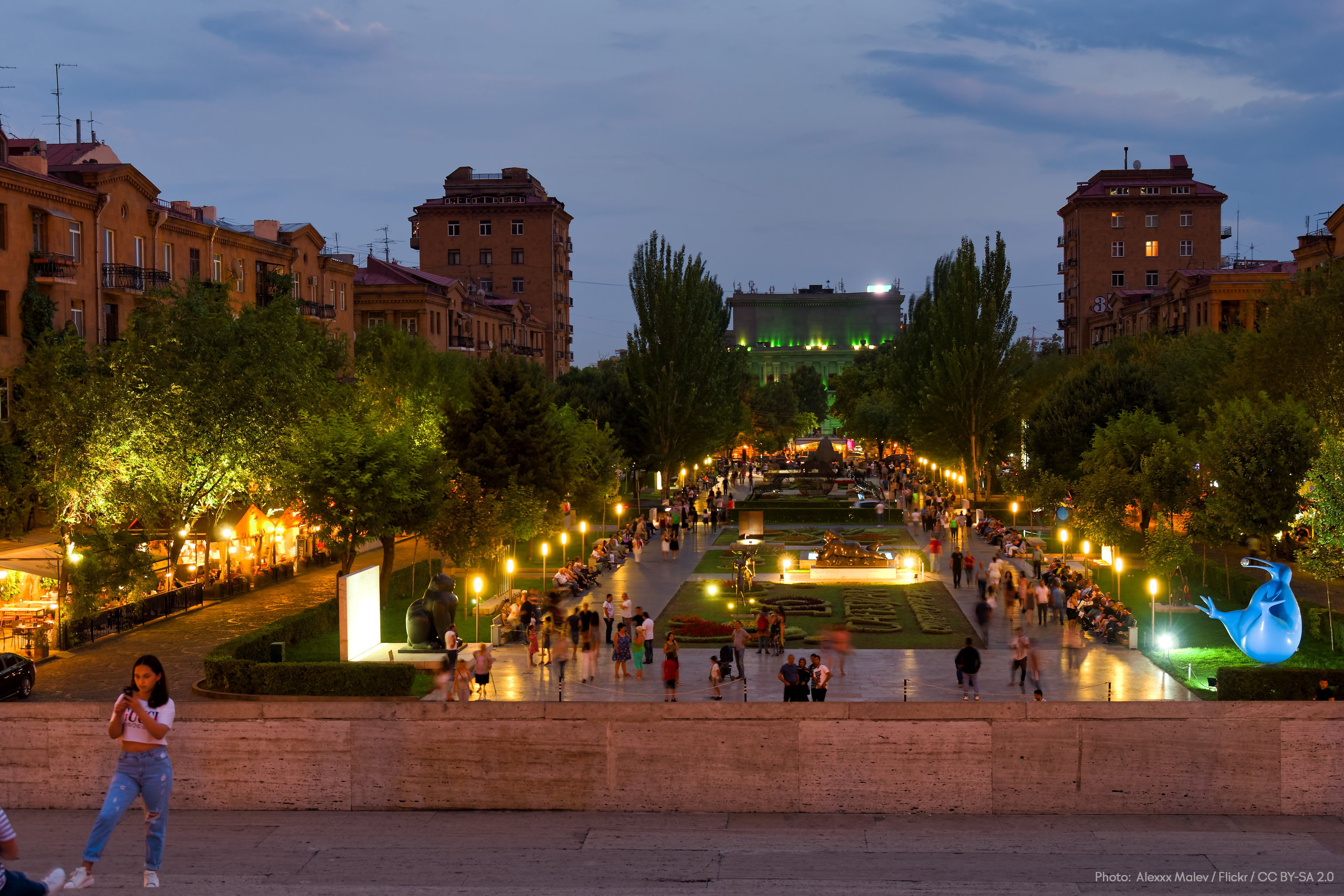 A journey through Armenia

Once again this week, Midnight Weekly is hopping off the train to help you discover (or rediscover) places you can get to by rail. We’ve decided to whisk you off to a place where influences from that part of the world mingle with those of the Old Continent: Yerevan, the splendid (albeit little-known) capital of Armenia. While it may, like the rest of the country, have been shaped by the genocide back by the ‘Young Turks’ movement between April 1915 and July 1916, today the city is a vibrant, colourful and exciting place to be. After brief stops in Nantes, Swedish Lapland and Vilnius, let’s head off to this buzzing metropolis.

Founded in 782 B.C., Yerevan has had a long and tumultuous history, which can be understood through its architecture. You definitely have to visit Republic Square, St. Gregory Cathedral, the Blue Mosque and, of course, Tsitsernakaberd, the moving monument dedicated to victims of the genocide. But you don’t need us to tell you that. Instead, we suggest you visit the Cascade, a giant stairway that runs up several terraced gardens and is one of the symbols of the city. But don’t make the mistake of just sticking to the outside. The complex in fact holds an art centre over four levels that hosts contemporary art exhibitions, all too often overlooked by tourists.

Then head to Matenadaran, whose name is a contraction of two Armenian words that could be translated as parchment and depot. Built 1959 in by the country’s Soviet government, this fortress is home to 23,000 manuscripts and 500,000 archive documents that are stored inside. Among them you’ll find rare pieces like a complete Armenian Gospel from the seventh century, as well as an array of Greek and Ethiopian texts. This place offers a trip back in time that will fascinate all fans of ancient literature.

After you’ve soaked up all that culture, pull up a chair at Dolmama and sample some Armenian dishes. This local favourite has friendly staff and a comfy, retro decor. On the menu, you’ll probably find the city’s best traditional food, starting with a version of dolma, vine leaves, where minced meat is replaced with sirloin, a touch of chilli and rosemary – a dish that’s worth the trip alone. But that doesn’t mean you should overlook the khashlama, an excellent meat and potato ragout that also has wine and crème fraîche in it. Trust us, it’s delicious.

Now head for Kond, the oldest part of Yerevan, which is very different from anywhere else in the city. Filled with many part-ruined buildings, which are still inhabited, this is the most artistic and edgy part of town. Frescos, small and large, cover many of the neighbourhood’s walls, which are taken in on a casual stroll. Once you’ve finished, don’t forget to mooch down the Soviet-era tunnel, also filled with street art, which will lead you near the Hrazdan Gorge and its ‘Children’s Railway’ – ideal if you’ve got the little ones with you.

While there’s plenty to keep you busy in Yerevan, now we’d suggest heading out of town to explore Lake Sevan, around an hour away. Located 1,950 metres above sea level and measuring a whopping 78 kilometres wide, it’s a veritable inland sea, hidden in the Caucasus. Described by Russian author Maxim Gorky as a piece of sky that had fallen into the mountains, it’s a truly spectacular sight that will dazzle any visitor. Visitors in these parts are few and far between, so you’re likely to have the beauty spot to yourself.

Finally, head back to Yerevan to finish up at basement restaurant The Club. It may not have a very Armenian name, but is one of the best spots for high-quality local cuisine. Amid a very styling setting – all exposed beams and stone – the young team help create a warm and intimate atmosphere that draws intellectual types from throughout the city. But let’s be clear: there’s nothing snobbish or exclusive about this place. In fact, you’ll never want to leave, especially once you’ve tried the delicate dishes that put a fresh, international spin on Armenian classics. It’s such a buzzy, friendly place that you’ll feel right at home in no time.

We’re heading for this small, little-known country between the Caucasus Mountains and the Black Sea. So pack a swimming costume, put on a sturdy pair of shoes and let’s head to this one-of-a-kind metropolis.

Less touristy than other Croatian cities like Dubrovnik and Split, the capital is really laid-back and full of amazing things to do. Here’s what we’d recommend doing there.