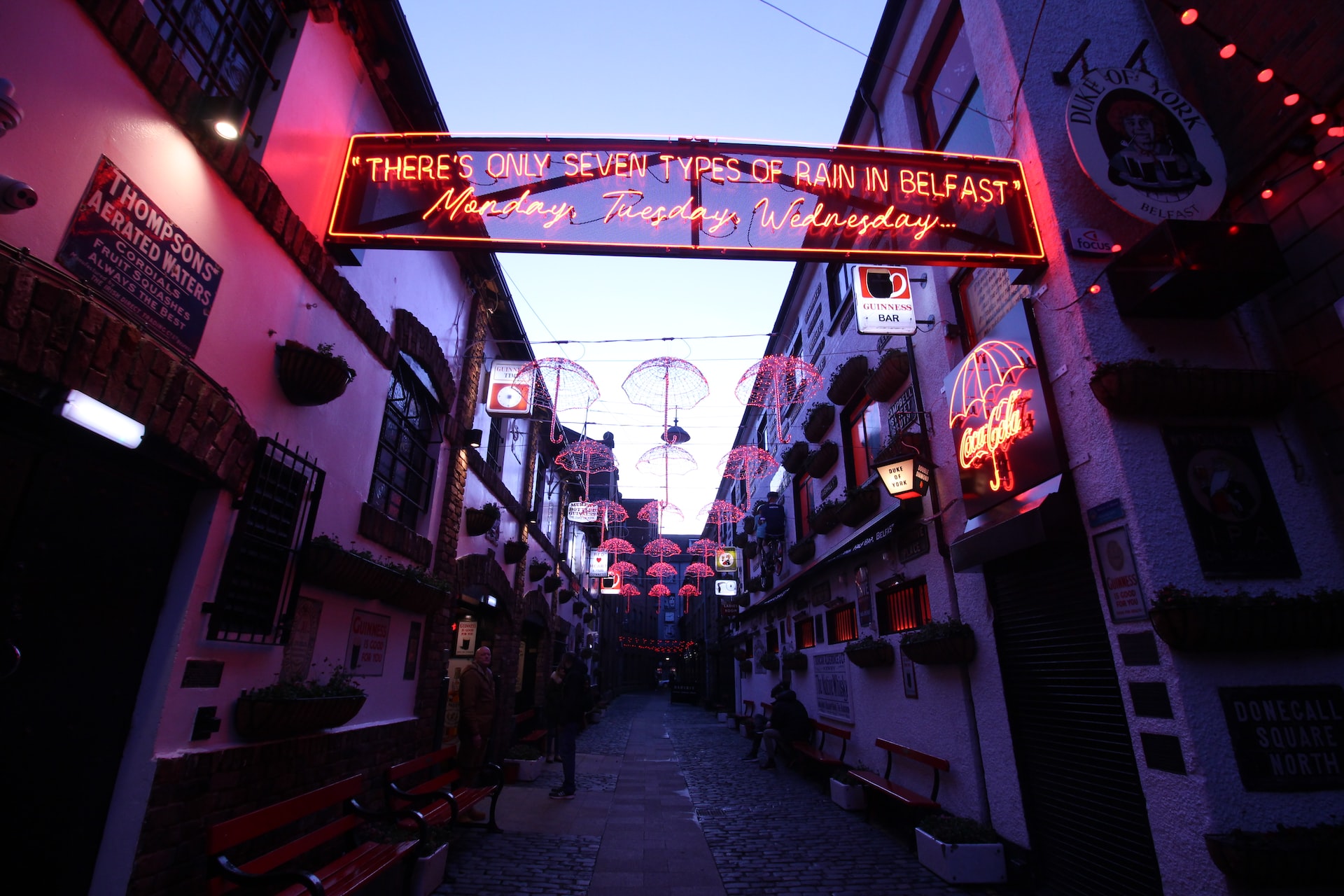 In the footsteps of giants

Over the past few articles, we’ve visited places as different as the Aeolian Islands, the Lofoten Islands, Sofia and Zagreb. And this time we’re heading to Belfast in Northern Ireland. Lesser known than the likes of Dublin and London, this city is as historic as it is fun. Here’s a whistlestop guide to the capital.

Let’s start with a museum, and a pretty unusual one at that. The Titanic Belfast is an impressive six-storey building on the site of the dockyard where the famous ship was built. Aiming to convey the vast scale of the vessel, the museum has nine galleries filled with interactive exhibits – a truly unique experience.

Next up, you should take a tour of the city’s incredible street art. Northern Ireland apparently has more than 2,000 murals, and the majority of those are found on the streets of Belfast. Often political, and always brilliantly creative, these works are a means for the city’s youth to have their voices heard about the conflicts that have shook the island of Ireland for far too long. While some of them call for peace and conciliation, others function as signs that you’re now entering catholic or protestant territory.

If you’re feeling peckish, we’d definitely recommend lunch at The Barking Dog. Opened in 2008 by chef Michael O’Connor, this restaurant serves up trendy modern twists on traditional Irish food like a delicious soup of the day, a supreme of chicken or a burger overflowing with brilliantly cooked onions. The Barking Dog also offers veggie, vegan, gluten-free and lactose-free options. It’s all really damn good, and the produce is all incredibly well sourced.

When in Belfast, you must visit Crumlin Road prison, undoubtedly one of the city’s most surprising sights. Founded in the 1840s and in use until 1996, this place must be among Ireland’s most haunted spots. Innumerable prisoners passed through its doors, including the famous Martin McGuinness and Bobby Sands. While no one has been locked up there for years, this four-storey building remains a disturbing and fascinating experience. But perhaps the most astonishing thing about the place is that you can rent it out for… marriages.

Now it’s time to head over to the Metropolitan Arts Centre Belfast. The MAC is one of the city’s best cultural institutions. The exhibitions are always on point, the plays and dance pieces are fantastic, and the permanent exhibits are always worth a browse. However much you like your art, the museum architecture is just as impressive as anything you’ll find inside.

As ever, our final stop will be a restaurant: the incomparable OX. It may be one of just two Michelin-starred restaurants in Northern Ireland, but there’s nothing stuffy about this place. The two friends who founded it 2013 serve up truly exceptional dishes in a laid-back setting. Stephen and Alain always put the ingredients front and centre and give them the treatment they deserve, whether it’s meat, fish or veg. The result is dishes that are unfailingly generous and full of feeling. And the wines here aren’t bad either.

Dublin, the capital of the Republic of Ireland and the home of Guinness, that super-famous dry stout Irish people around the world can’t get enough of.

Say you’re off to the city for a week or so sometime soon, there are loads of amazing exhibitions you should check out. Two of them will take you on a trip back in time.