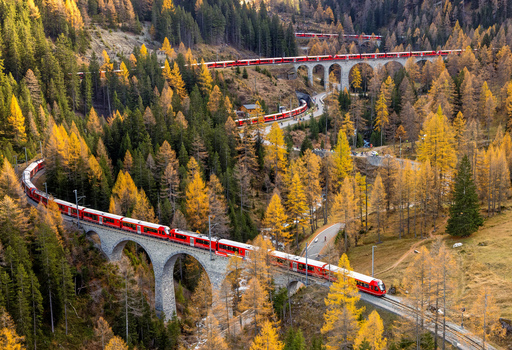 The topography of Switzerland may not lend itself to straight lines quite like the Aussie desert, but that hasn’t stopped the central European country from setting other railway records. On October 29 2022, the Chemins de Fer Rhétiques (RhB) launched the longest-ever passenger service on a 25-kilometre stretch of railway line in the Grisons which has been listed by Unesco. The trip took around 45 minutes, at an average speed of between 30 and 35 kilometres per hour. The journey was organised to celebrate 175 years of the Swiss railways, with no fewer than 100 carriages stretching out over 1,906 metres – recognised as a record by the Guinness World Records.

Clearly, getting this 3,000 tonne service on the rails required a huge logistical effort. Overall, seven drivers and 21 technicians were on board to ensure a smooth service between Preda and Alvaneu via the Albula tunnel. Such a significant number of people were required to ensure that the 100 carriages, grouped into fours, could accelerate and decelerate in a perfectly synchronised way. The mechanics were in constant contact, even in the tunnels and narrow valleys, thanks to a telephone system from the Swiss army. Renato Fasciati, the director of the Chemins de Fer rhétiques, deemed it an example of ‘Swiss perfection’, referring to the renowned timeliness of his fellow people. Ironically enough, however, the train was 20 minutes delayed. But we see his point.

And the route the train followed wasn’t any old route. The 61-kilometre-long railway passes through a series of tunnels and bridges that are renowned by train buffs throughout the world for their amazing views. Two services, the Glacier Express and the Bernina Express, usually use the line. The former, known as ‘the slowest express service in the world’, takes high hours to travel the 291 kilometres  between Saint-Moritz and Zermatt. The latter departs from Croire or Saint-Moritz for Tirano in Italy, and offers majestic panoramas of the surrounding mountains and landscapes.

In fact, it was remind people of the beauty of many Swiss rail journeys that the Chemins de Fer Rhétiques wanted to beat the previous record, set by Belgium in the 1990s. In an interview with Radio Télévision Suisse (RTS), Renato Fasciati didn’t shy away from the fact that it was a marketing stunt aiming to lure tourists and reboot the rail industry following the Covid-19 lockdowns. In total, 150 passengers, journalists and VIPs were able to travel on this one-of-a-kind service. This clearly pales in comparison to the 4,550 seats that were on board (according to Euronews).‘Today the whole world knows that Switzerland and the Chemins de Fer Rhétiques are more than worth the trek’, Fasciati declared the day after the journey, adding that more than 90 publications had relayed the news across the globe. In other words, it was a brilliantly executed comms experiment.

But it must be said it took a lot of work to actually carry it out. As Fasciati admitted, two tests had been undertaken in April and May, and not everything had gone to plan (he didn’t specify any details). Fortunately, on the actual big day, it had all worked out just fine. Without being able to climb aboard the train themselves, locals contented themselves with being able to watch the train go past from the side of the tracks. Images in the local press show couples and families on deckchairs in nearby fields – quite a sight in itself. All in all, the exercise was a well-deserved tribute to the ‘pioneering spirit’ of the Swiss railways.