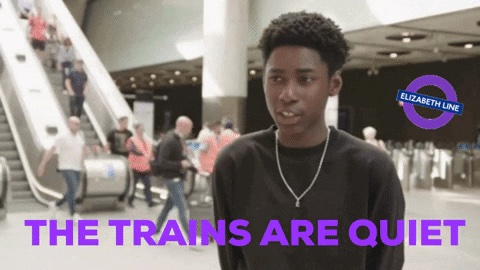 The world’s oldest underground gets a glow-up

Bakerloo, Piccadilly, Victoria, Waterloo… Anyone who’s been to London will no doubt recognise those station names. They’re all on the network of 11 Tube lines that criss-cross the British capital and carry five million passengers to their destination daily. As you may well know, on May 24 2022, another new line appeared on the world’s oldest underground network (which first opened in 1863). It’s named the Elizabeth Line in homage to Queen Elizabeth II, who celebrated her Platinum Jubilee just a few days after it opened and died on September 8 this year at the age of 96.

The line is exceptional in every way. It cost a whopping £19 billion, or €22 billion, 70 percent of which was paid for by taxes. It crosses almost all of the capital, from east to west, and now links the City of London and Heathrow in just 34 minutes. And the works took 13 long years, requiring millions of tons of earth to be excavated (much of which was used to expand the island of Wallasea in Essex and create a new nature reserve). The line is 30 metres beneath the surface of the capital and travels beneath the River Thames.

The construction of the Elizabeth Line also led to some significant archaeological findings. Like several major metropolises, the ground beneath London is filled with vestiges of the past. Among the most arresting of the lot is no doubt a grave containing 3,300 bodies buried during London’s great plague, which was uncovered beneath Liverpool Street station. Few people know it, but the careful management of archaeology is a recurrent problem when building new public transport networks in historic cities like Rome, Paris and so on.

But Londoners really needed the new line. The Tube is known both for all that history and for being very overcrowded. To make sure the errors of the past weren’t repeated, the new line was designed in a very different way. According to the Transport for London website, the new stations created for the line are accessible to all, and will allow people to travel across the city much more easily. The local transport body also made sure each of them had its own unique look and feel, thanks to the work of different artists and architects. At Farringdon station, for example, you’ll find Avalanche, by the artist Simon Periton: 45 three-metre-high glass panels on which diamonds that seem to be moving have been digitally imprinted. The French newspaper Le Monde has described the feel of the new stations as ‘cathedral-like’. In other words, they’re spacious, with wide corridors allowing people to get around more easily, and have such high ceilings that you will never get that suffocating feeling that’s so common when you travel underground. The platforms are 250 metres long, meaning they are appropriate for the 11-carriage trains produced by Alstom.

As for the regularity of services, trains run every five minutes, or 12 an hour.  Eventually, the aim is to have trains running every two and a half minutes, or 24 an hour. That will mean 150 million passengers take the trains each year, with 10 percent more people using the underground network each year. And happily, locals have taken to the new line already. On its very first morning, 10,000 were present at Canary Wharf station at 10am, and 14,000 in Paddington, with 130,000 using the line in its first few hours.

This initial success may be explained by the fact that Londoners were waiting so long for the trains to start running. The line opened four years late, and over budget by £400 million, or €463 million. So it perhaps wasn’t all that surprising that the inauguration of the new line was accompanied by an announcement of higher underground ticket prices. Thus, according to the BBC, a single journey between the centre of the city and Heathrow Airport will cost £12.50 on the Elizabeth Line, compared with £5.50 on the existing Piccadilly Line. That’s the price of modernity, we suppose.

Is it a bird? Is it a plane? No, it’s an Aérotrain. That’s how the credits for a Netflix series about this far-fetched invention would start.

In 2012, it told a Californian newspaper how he intended to launch a mode of transport travelling at more than 1,000 km/hour thanks to capsules propelled in a vacuum tunnel.