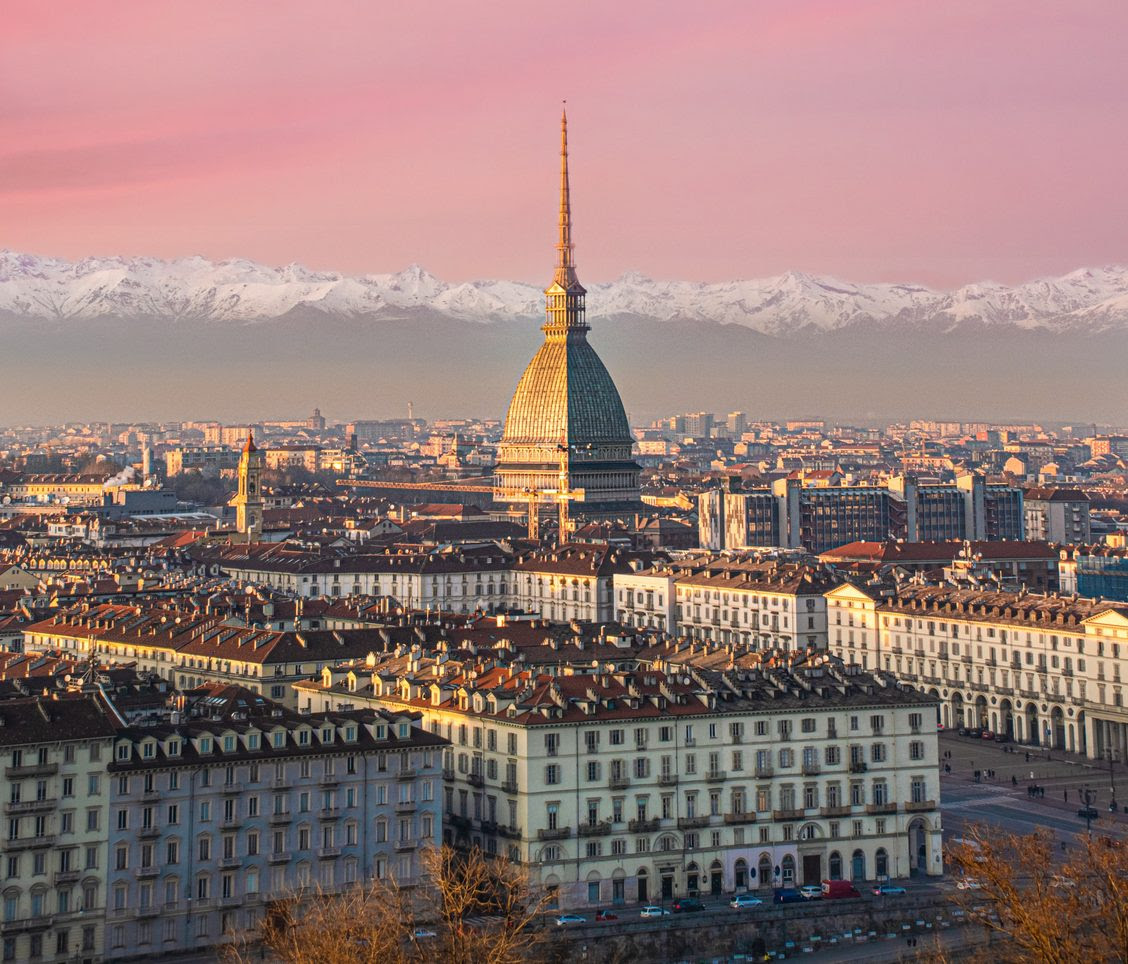 When considering a trip to Italy, we often fall back on the classics: Rome, Florence, Venice or Naples. But this week we’ll be singing the praises of a much less touristy city, with just as much impressive history, architecture – and food. Turin, which was the first capital of a united Italy, is the jewel of the Piedmont region. Here’s where you go when you get there.

Start your trip by soaking up the city’s history around the Quadrilatero Romano, one of Turin’s oldest neighbourhoods. You’ll wander through a succession of historic streets and squares that date back to the Middle Ages. Not far from there, you’ll be able to discover one of the city’s oldest religious buildings, the Santuario della Consolata: a baroque basilica whose intricate interior details will blow you away.

Come to Turin, and you’ll come face to face with one of the most fascinating religious enigmas: that of the Shroud of Turin, displayed at the Museo della Sindone. This time-worn sheet contains the image of a dead man who appears to have suffered a similar ordeal to Jesus Christ. No surprise, then, it’s become an object worthy of pilgrimage for a number of believers, and that the Catholic church considers it an icon (even if carbon-14 dating has proved the object in fact dates back to the… eighteenth century).

Enough of religion and now for some culture. Right now, if there’s one exhibition you shouldn’t miss when in town, it must be one that pays tribute to several Italian artists who were inspired by the 1930s Paris. Parigi era viva, De Chirico, Savinio e les Italiens de Paris is on at the Fondation Accorsi-Ommeto, Turin’s museum of decorative arts. It’ll hammer home just how inspirational the City of Light was for this diverse generation of Italian artists.

Next up, head to two more of the city’s great museums. The first, the Museo Nazionale del Cinema, has an obvious home in Turin, considering it was the cradle of Italian cinema for so many years. The stunning Mole Antonelliana building that houses it was once the tallest in Europe, and today it holds an impressive collection of 80,000 photos, 12,000 films and 300,000 posters.

A little more unusual is the Museo Egizio, which has the largest collection of ancient Egyptian artefacts outside of Cairo. You’ll be taken back both by its array of mummies (some of whom still have their hair) and the sheer diversity of papyrus documents on display here. Another thing you shouldn’t miss: the area dedicated to the tomb of architect Khâ and his wife Merit, whose 550 objects will dazzle any visitor.

Leave the pharaohs behind to follow in the footsteps of the Dukes of Savoy, who reigned over this Piedmontese city for several centuries. Start at the Palazzo Reale, which elegantly blends neoclassical, rococo and baroque styles. The dukes spared no expense in residences like this: this one’s frankly over-the-top staircase makes for quite the entrance, while the garden offers a peaceful place for a walk. Want to continue your historic meander? If time permits, leave the city and discover the castles of Agliè, Racconigi, or the Reggia di Venaria, which feels a bit like their equivalent of the Palace of Versailles.

Time to eat. And you’re in luck, because the Italian part of Piedmont is the historic center of Slow Food. This movement emerged in the neighbouring city of Bra, with the aim of slowing the industrialisation of food production. A reference point for sustainable food movements around the world, it has helped protect varieties of fruit and veg, breeds of livestock that were once on their way out, and ancestral cheese recipes.

Two of the restaurants who’ve deceived official Slow Food recognition are in Turin itself. The first is quite simply one of Italy’s best restaurants: the Consorzio. It serves up delicious modern twists on Piedmontese cuisine, packed full with Slow Food-approved ingredients, and has an excellent natural-wine menu, too. Special mention must be made to its agnolotti, its brasato di Fassona and selection of Alpine cheeses. Another restaurant you won’t want to miss: the traditional Antiche Sere osteria, where you’ll be equally blown away by the quality. Buon appetito!