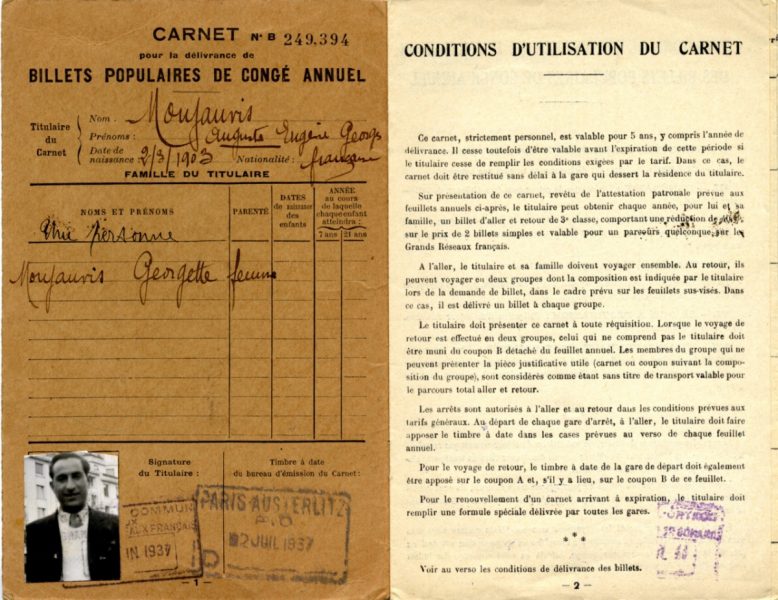 The holidays are over, and while you may be finding some joy in catching up with all your pals, we’re in no doubt you’re already feeling like taking off again. Panic not. In this latest edition of Midnight Weekly, we’ve dug up a fascinating slice of history that is sure to distract you from your wanderlust.

Did you know that each year, people in France have the right to savings of between 25 to 50 percent on a return train in France for them, their partner and their children? This fortunate state of affairs is known as the billet populaire de congé annuel and has been in place for more than 85 years. So let’s go back in time to discover where it came from – and why.

In 1936, France was going through a time of great social upheaval, and largely for good. This was the time of the Front Populaire, led by Léon Blum, who presided over a political union that became synonymous with social progress. In just a few weeks of government, and following an unprecedented general strike, salaries were raised, the working week was capped at 40 hours and union rights were recognised. Thanks to the introduction of two weeks of paid annual leave, it was also the beginning of the grandes vacances France still cherishes to this day.

That might not seem that amazing in 2021, but this particular advancement changed the lives of all French people, who could now look forward to a well-deserved break every year – an opportunity to recharge their batteries and spend time with family. However, many still lacked the means to travel outside of their immediate vicinity.

So, at the start of August 1936, Léo Lagrange, Under-Secretary of State for Sports and the Organisation of Leisure, decided to launch a complementary initiative that would make all the difference: one paid train ticket per year. The newspapers were all over it. Le Populaire, for example, wrote that this ticket would allow ‘anyone with paid leave, whether travelling alone or accompanied by their wife, to obtain a reduction of 40 percent on a third-class ticket on a journey over a minimum of 200 kilometres, as well as half price for children aged between three and seven’.

It may seem like a mere gesture nowadays, but that was a big deal back then. At the time, cars were still the reserve of the rich and trains were the only means of transport that would really allow the law on annual leave to have some effect (in encouraging people to actually travel, rather than just stay put). Predictably, the programme was a hit from the start: 600,000 workers signed up, making trains not just the domain of the elite. Some richer people even started using congés payés as a dismissive term for those making the most of the scheme.

Without necessarily heading to the other end of France, workers discovered the joys of the summer break. Many Parisian workers would content themselves with a break by the Seine or Marne, while others would go a little further and try camping in Normandy. It was also around this time that seaside resort towns became summer destinations for a large number of people, thanks to their train stations. Among them: Deauville, Saint-Malo, Cabourg, Nice and Biarritz.

Things were made a little difficult because many of the train companies – all private at the time – weren’t entirely on board with the idea. Léon Blum even threatened to nationalise them in his efforts to get them to put the new annual ticket offer in place. The irony of the story? The unexpected influx of travellers allowed all those businesses to be in credit for the first time since 1928.

Today, the Société Nationale des Chemins de Fer Français (SNCF) doesn’t shout about this initiative all that much. But if you wanted to prolong your summer holidays and plan a trip for later in the year, it’s still yours for the taking. Here is all the information you need – and don’t forget that you can do it every year after that too.

The people afraid of flying

All those safety protocols can get a little off-putting, let's be honest. Are you among the 30 percent of people who are afraid of flying?